Yes, I am a “Model and Influencer.” No, You Don’t Get to Mistreat Me! 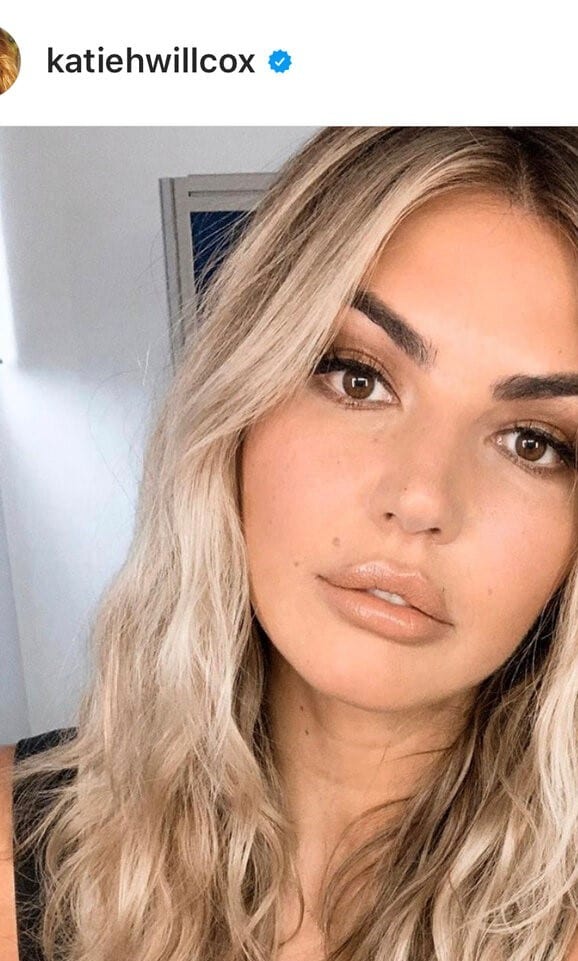 Hello from Spain! I just had the most interesting sequence of events take place. Today, while shooting on location at the beach, a man walked by. Nothing unusual about that. But, then he came back and walked right up to our crew of six people. He interrupted our shoot to ask for a photo. Also, not unusual. Often, people walk by taking pictures of us taking pictures, and I don’t mind because I realize they don’t usually see a photoshoot production in action, and it can be exciting to watch. I figured this man was being polite and asking if he could take a photo first, which was nice! Except he wanted to take a picture with me, not of the production. By the time we realized what he wanted, he was standing next to me and gave his phone to Fred, our photographer. It caught me off guard, and as you know, I am not a timid, shy person, and yet, I felt bad saying, “No.”

It all happened very quickly, and he left. We talked about how weird that was, and I was mad at myself on the inside for not saying, “No! We are working, and I don’t want to take a photo with you.” I was blaming myself. I am a strong, outspoken woman, but I don’t like confrontation at all, especially with strangers. I talked with Carmina, the makeup artist, and she reassured me that I have the right to say, “No.” I know that, but I didn’t.

We continued working and walked closer to the beach to shoot more outfits. Sure enough, here comes that guy again. Only this time, he was even more strange. He pulled out his wallet and offered money to the photographer to do another photo. This time we all were adamant; it was a definite, “NO.” He got the vibe and walked away. At least, that is what we thought.

As we moved to a new location near a bar on the beach, Carmina said, “He is right there watching us!” It was a perfect sunny day at the beach, with excellent crashing waves, and this man is sitting with his back to the ocean watching me. I could feel it, and it felt uncomfortable. Third time is NOT a charm, but he tried anyway. Yes, he came up to us for a third time asking for another photo with me, and at this point, the entire crew was telling him to leave and said a collective “No.” He left. Well, that was the last we saw of him anyway.

As that was happening in real life, on Instagram, another situation was going down. When I am at home, I am a busy person. Although I post on IG regularly, I don’t always have time to respond to comments or DM’s, but I try my best. My DM’s always say 99+ unread messages because I get so many. If Instagram were my full-time job, then I would be on it much more. But, I run a company, have a three-year-old, a husband, several employees, over 60 models, a house under construction, and still need to live my real life. Plus, I don’t want to live on Instagram, I want to live in real life. I think I do an awesome job sharing who I am authentically and unapologetically. Let’s say; I am not afraid to be unfollowed. 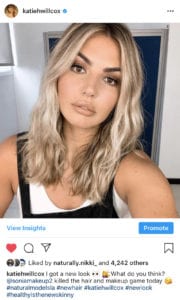 I posted a photo on Instagram yesterday showing my new haircut. I also had an hour of professional makeup done for the photoshoot. If you follow me on IG, you know I don’t wear a full face of makeup that often. When I was done working and sitting in my hotel room with time to kill on IG, I saw a comment that suggested I had my lips done because of the way the makeup artist colored them. So, I posted childhood photos of myself with my huge lips stating, “The secret is out, I first got my lips done at age 4.” I then went on to talk about why we as women care if someone decides to plump their lips or alter their appearance at all? I didn’t get my lips done, but even if I did, why would it be okay for other women to comment on that and say, “I liked your lips better before.” Or, “Are your lips real?” etc.

My face is my face, and my body is my body. If I want to alter my face, and I like it, why do strangers think their opinion of my face or body is more relevant or valuable than my own? And how is that not rude as hell to ask someone if their lips or body parts are “fake?” This topic is a whole different blog post and a complex subject I touched on in my IG stories, and we can get into later.

After posting my childhood photos and lighthearted response to women commenting on other women’s appearance negatively without merit, I got flooded with DM’s from my followers. Lots of hearts, clap hands, and women agreed that women should do what they please with their bodies. But, one follower was sending me message after message. She also asked if my lips were real. Then, she continued to say my lips are “totally different than my childhood photos,” I posted. She kept going… (see below.) 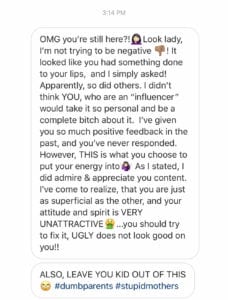 After responding to her 7 rude messages, this is what she said to me….

She then sent me quotes I posted on HNS. I wasn’t mean to her, I didn’t call her names, I just pointed out that she is in my DM’s and I am not on her page. I wished her well because clearly there are issues here. Her response.

Out of hundreds of comments and messages, only a few people said my lips looked fake. Hundreds of others were super funny and kind because my followers are 99% amazing women! But, I took the opportunity to write this woman back, and yes, I was sarcastic. Like my real-life stalker, she crossed a boundary. Her response was extremely transparent to me that she was projecting her feelings about herself onto me, and I let her know that. She wrote rude things about my appearance, and I made jokes back to call her on it, she then called me names, first a liar, a bitch, said I had an ugly spirit, was a #stupidmom and a #dumbparent. I realized what I was dealing with and wished her the best to which she tried to use my vulnerability and experience with poor body image as a child against me. I am a 35 year-old-woman being bullied by an adult woman who has the intent to hurt me for no reason at all. She didn’t. Instead, she just made me realize the horrific reality young people live daily on social media. That made me sad, and then it made me mad.

It was interesting that she said, she didn’t expect me, an, “influencer” to take it personally and be a complete bitch about it.” Again, my fault for not saying, “No” earlier today, and my fault for calling her out. She mentioned how I didn’t respond when she has messaged me before; I never saw them. I blocked her.

In two days, I had two instances where my boundaries where crossed. I didn’t speak up when I wished I would have, and when I did speak up, I was called names and belittled, sadly, by another woman. Again, I did nothing wrong. I was living my life, being myself, when two strangers inserted themselves into my world and misbehaved. There is this expectation that because I am a model, I am in a way public property, an object that some dude could show is friends, or worse. On the other hand, I am just some influencer who deserves to be harassed and have my appearance and character attacked and “shouldn’t take it personally.” If I don’t like it then I shouldn’t be on Instagram, right? WRONG! That is the same bullshit mentality we have towards bullies: When you are bullied, “you should be the better person and ignore them.”

I am a firm believer in picking and choosing your battles, and protecting your energy, but to that mentality, I say, “NO!” I didn’t say it today, but I am yelling it now. Not holding people accountable for their inappropriate, rude, and poor behavior doesn’t make you “the better person.” It hurts you further. You do not have to sit quietly and take abuse. Not from family, friends, bullies, or followers.

I do not have to tolerate being sexually harassed, followed in public, or made to feel uncomfortable by someone because I am a model or they think I am attractive.

I do not have to tolerate rude comments about my appearance, character, or lifestyle because 131,000 people enjoy my content on Instagram.

I don’t have to leave my space because other people feel entitled to it and act like assholes.

I don’t have to accept responsibility for another person coming into my world, physically or online, with the intent to harm me in any way.

I can respond to people who come into my world, negatively, however, I feel it is best at the moment!

I am not required to be polite, and that doesn’t mean I am stooping to their level. I means I am not accepting that shit and you don’t have to either.

Furthermore, me calling these people out is not bullying. If you can say those things to me in my direct messages, then you should stand behind them publicly as well.

I NEVER want to make others feel uncomfortable because I respect personal boundaries. I NEVER comment on sexual, rude, mean, harmful, or inappropriate things to people on social media. I don’t do that because regardless of what I look like, or what other people think of what I look like, I know what self-hatred feels like. I also know what healing feels like, and happiness, joy, fulfillment, and undeniable self-love. I know what it feels like to truly know myself. When you reach that place in life, deep in your soul, you want to help others find their way, not continue to beat them down like the rest of the world.

No one is immune to negativity, and no matter what you look like, how many followers you have, or how much money is in your bank account, people will cross your boundaries. People will try to tell you who to be, who you are, and who you are not. You will be gossiped about, called names, and as a woman, you will be victimized in various ways throughout your life.

You will blame yourself.

IT IS NOT YOUR FAULT!

It is not your fault if you couldn’t say, “No” even though you wanted to.

It is not your fault that others live with hatred in their hearts.

It is not your fault.

Beautiful girl that is not who you are.

This is your life, your body, your face, your mind, your reality. You get to decide what you believe about yourself, look like, and what you accept into your world — no one else. You are full of goodness, potential, and love.

We cannot create change by, “being the better person” a.k.a remaining silent, accepting it, and blaming victims. Together we can fight back against the ugliness in the world by keeping our world beautiful, safe, positive, healthy, and secure. We have to because that is where our goodness grows. We can forgive ourselves, recognize other’s pain in their bitter words, and stop them from shattering all that we are and all we are becoming. I don’t hate these people or wish them harm. But, I do not have to accept their behavior, and you don’t either.

I Love you. Your favorite “influencer bitch,”