My Thoughts on Dancing with your Demons – Frank Warren of PostSecret 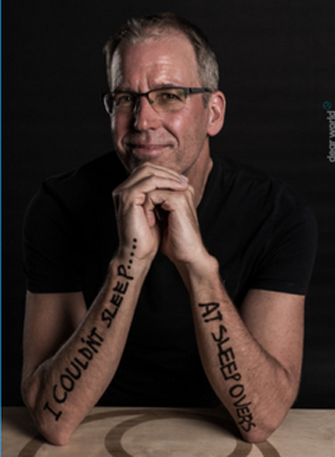 Have you ever had a demon in your life that caused you so much pain you started to consider all possibilities to make the suffering stop?

Before I knew what to call it, I always remember having trouble sleeping through the night. For most people, getting back to sleep after waking up at night is easy, but for me it was a battle. I would try hard to fall back to sleep and when that failed it would compound my worry and make the problem worse.

A couple activities I discovered on my own helped a little in keeping the demon at bay. I began journaling in the evening to bring out and face my anxiety before I went to bed. During the day, I would swim and bike to exhaustion so at night my brain couldn’t fight my body’s drowsiness. Despite these efforts, in my 30s the demon was back stronger than ever. The torture started when the sun went down. Most nights I could measure my sleep in minutes not hours. During the day I was tense and hyper-vigilant.

I was ashamed and afraid. I tried to keep it a secret from my wife, but couldn’t. She encouraged me to talk to my doctor about it, and I did. After I opened the conversation, my general practitioner asked me.

Have you thought about killing yourself?

I felt like I was outside my body as I answered. Yes. I said, and then went on to describe some specific thoughts. It was such a relief! This shameful secret was coming out and it was so much easier than I had imagined. My physician stopped me and wrote a prescription. I started to feel a little bit guilty for burdening her with my story, but I left her office with hope.

Within ten days, the medication had helped me reset my sleeping pattern.  I still wasn’t sleeping as well as most people but I was winning against my demon.

The medication gave me the confidence to try to dance with my demon rather that fight it. When I couldn’t find sleep at night I used it as an opportunity. I would get up to read a book or lay still and brainstorm about art projects I was working on, like PostSecret.

PostSecret is an ongoing art project where I invited strangers to mail me a secret on a postcard. The secret must be true and anonymous. To date, I have received well over a million from around the world, and they keep coming. And if your curious, you can watch a short TED talk I gave where I reveal the most extraordinary ones I’ve ever seen.

I planned a lot of PostSecret at night lying in bed, when most people were sleeping. Without my insomnia, it’s possible I never would have published six PostSecret books, been invited to the White House by President Obama to share what I have learned or created the PostSecret blog which has been viewed more than 825,000,000 times.

My demon made me different. It forced me to develop creative ways to combat it, alone, and then with the help of others. It gave me space to be unique. I’m not ready to say that I’ve turned my demon into my friend, but I’m glad I went through life with it.