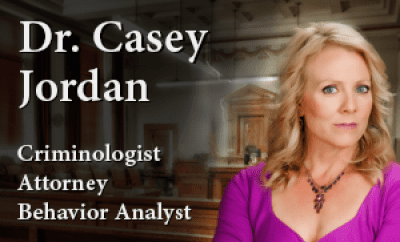 Dr. Casey Jordan is a criminologist, forensic psychologist, and professor who has taught and studied the nature of crime and violence for more than 30 years.  As an investigative profiler and behavior analyst, Dr. Jordan has interviewed more than 100 inmates and criminals to collect data on causal factors of their crimes, with a goal of using these variables to prevent future crime and solve cold cases.  She is a professor in the Division of Justice & Law Administration at Western Connecticut State University, has served on the defense teams of many high-profile murder cases, and has hosted her own hit series on Investigation Discovery:  “Wives with Knives.”  With more than 2000 media appearances, Dr. Jordan is a regular media commentator on 24-hour news channels during breaking crime events and live court trial coverage.  Dr. Jordan has often served as CNN Criminologist in covering unfolding spree-and mass-murder events from the DC Snipers to the Las Vegas massacre.