He is the first ever Native flutist to ever be featured in Rolling Stone Magazine.

Cody, of Dakota, Cherokee and Romani Gypsy descent has released 12 full length albums between his flute music and his Band “Blackbird” that incorporates Native flute into contemporary rock and roll or what they self-classify as “Alter-Native Fusion” Cody, and his band Blackbird have shared the bill with such artists as John Trudell, Jewel, Black Eyed Peas, Redbone, Nelly Furtado and many more.

Growing up as a child who was misdiagnosed by the Mental Health industry, music was Cody’s salvation and became even more so at the age of 9 when he immersed himself with learning the Native flute, an instrument that’s music was a calming center for Cody. A suicide survivor and advocate for suicide awareness Cody has traveled the world telling his story that brought him where he is today as one of Indian Countries top Performers whose work has also crossed into the mainstream. Rising through adversity, using his passion as the catalyst, Cody’s performance weaves together a story along with his music that is relatable to his audiences.

“Not only is Cody Blackbird an incredible Native Flute player, but I love how he blends the Native sound with blues and classic rock. He and his band definitely know how to bring the heart and soul.”

“Cody’s music, which he terms “AlterNative Fusion,” sits in a class by itself in the music world” 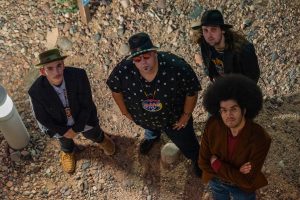 Cody has found his calling as a musician and has had worldwide success especially with his band Blackbird as they have recently received attention and praise from pop sensation Mike Posner and the Steve Miller Band’s Kenny Lee Lewis as well as Kris Kristofferson and others.

Blending the old with the new, Cody merges the Native American flute with powerful vocals into contemporary blues rock sounds with Blackbird. The band has been compared to a hybrid Native version of the famous Blues rock band “Blues Traveler”

Blackbird carries a message of finding purpose and pursuing one’s life goals in a positive manner to reflect change in one’s self and thus their community and abroad, as well as stressing the importance of keeping culture alive in music.