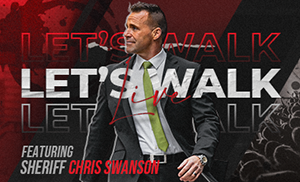 As Sheriff, Christopher oversees the 6th largest Sheriff’s Office and 10th largest law enforcement agency in the State of Michigan. His career has led him to witness some of the most heinous crimes and acts of violence one can imagine. He shares these experiences to audiences across the country to make a positive impact on their lives using lessons from the living and the dead.

Sheriff Swanson attended Mott Community College and holds a Bachelor’s Degree and Master’s Degree in Public Administration, both from the University of Michigan.